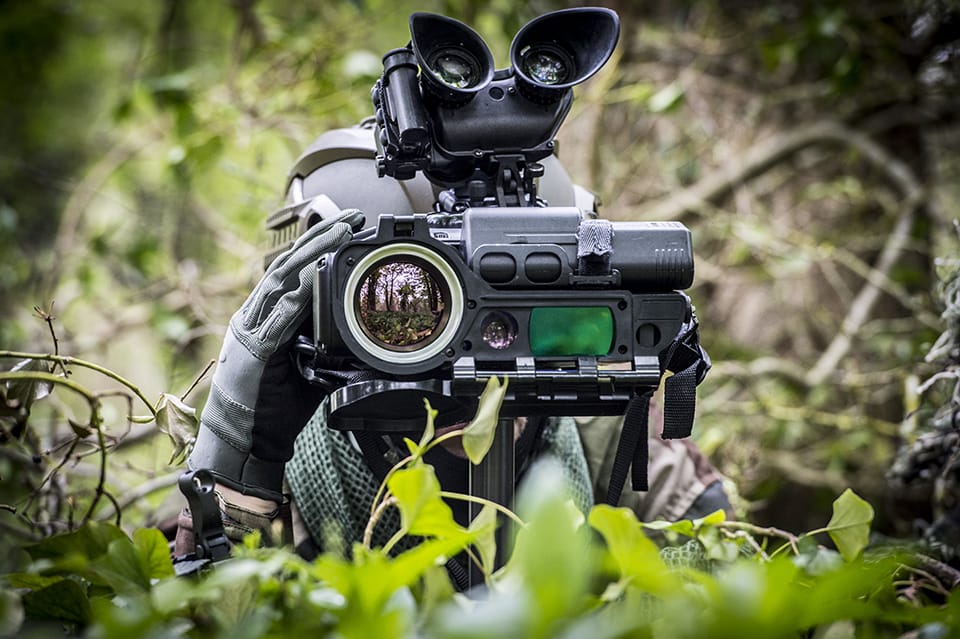 The SOPHIE-XF/VGA long-range hand-held thermal imager and target locator provides outstanding image quality at long range, day and night, giving Special Forces, border security patrols and coastguard services – to name but a few of the many potential users – the ability to gather and transmit precious data while keeping themselves and others safe.

Another stressful day in hostile territory. A dismounted Special Forces platoon leader is crouched behind a stone wall with his team, observing a small village over a kilometre away, teeming with local people and their families attending a community celebration. The success of his mission to locate a high-value target, and the survival of his team, as well as that of the people they are there to protect, depend at this point on his ability to rapidly locate and identify hostile elements, such as snipers, moving among the crowds.

The platoon leader reaches for the SOPHIE-XF VGA hand-held thermal imager/target locator slung round his neck. After scanning the entire area in a single sweep thanks to the device’s 20-degree field of view, he zooms in on a group of suspicious figures on a rooftop. Fusing video and infrared images of the scene enables the sighting to be verified – the video channel providing colour images that bring out key details, and IR technology allowing the shooters to be “decamouflaged”. The snipers’ range is then quickly determined with a single click on the laser rangefinder.

The platoon has orders not to engage, so the platoon leader streams the information to his command post, and awaits further orders and support. SOPHIE-XF VGA has done its job again, enabling a rapid decision to be taken to protect a team of dismounted soldiers and their allies, while retaining tactical superiority.

SOPHIE-XF/VGA achieves all this by packing a huge amount of functionality into its handy-sized casing (XF stands for “extended functions”). The beating heart of the product is Thales’s latest-generation cooled (and therefore highly sensitive) VGA infrared sensor, which delivers crystal-clear high-resolution images, even at long range. Unlike other handheld thermal imagers, the 20-degree field of view allows wide-area observation for superior situational awareness. And don’t forget that better image quality and a wider field of view mean shorter target detection times, and therefore faster decision-making for users and their superiors.

A further key advantage of SOPHIE-XF/VGA is its robustness to adverse atmospheric conditions, achieved thanks to the use of a wide aperture which lets in around 90% more light than competing systems typically fielding smaller-aperture optics, so that users still get high-quality images at long range, whatever the weather.

SOPHIE-XF/VGA can save images and video, and is equipped with USB and Ethernet connections that let it stream data and images across networks to command and control centres. This means that target information can be forwarded to close air support squadrons or coastal protection vessels, for example, and commanders can issue orders and provide decision-making support based on a complete tactical picture.

It’s all about tactical superiority

For military as well as civil users, tactical superiority means making rapid decisions based on accurate and up-to-date information while on the move, and successfully completing assigned missions while staying protected (“seeing without being seen”). With SOPHIE XF-VGA, situational awareness is maintained day and night, and data is fed into the decision loop in real time, giving dismounted soldiers and their commanders a crucial battlefield advantage, and allowing border and coastal surveillance teams, for example, to carry out protection as well as search and rescue missions quickly and safely.

Our Special Forces platoon leader, for one, is no doubt glad that he had SOPHIE-XF/VGA to help him successfully complete his mission and keep his team – and the local inhabitants – safe.

The SOPHIE family of hand-held thermal imagers and target locators – now almost 20 years old – has been sold all over the world, with more than 15,000 imagers in operation in 55 countries. Users of SOPHIE products and services include infantry, artillery and intelligence units, as well as Special Forces and logistics support professionals.

At the ninth meeting of Thales’s SOPHIE & Portable Optronics Users Club, held in Bordeaux, France in October 2016, members of the user community attended workshops on a range of topics, including SOPHIE-XF/VGA, SOPHIE Lite, the range of equipment available to support the SOPHIE product family, and “Understanding optronics in 25 minutes”. The event also included a night-time demonstration at a nearby military camp.